The barber’s trade has a long history: razors have been found among relics of the Bronze Age (around 3500 BC) in Egypt. The first barbering services were performed by Egyptians in 5000 B.C. with instruments they had made from oyster shells or sharpened flint. In ancient Egyptian culture, barbers were highly respected individuals. Priests and men of medicine are the earliest recorded examples of barbers. In addition, the art of barbering played a significant role across continents. Mayan, Aztec, Iroquois, Viking and Mongolian civilizations utilized shave art as a way to distinguish roles in society and wartime. Men in Ancient Greece would have their beards, hair, and fingernails trimmed and styled by the κουρεύς (cureus), in an agora (market place) which also served as a social gathering for debates and gossip. Barbering was introduced to Rome by the Greek colonies in Sicily in 296 BC, and barbershops quickly became very popular centres for daily news and gossip. A morning visit to the tonsor became a part of the daily routine, as important as the visit to the public baths, and a young man’s first shave (tonsura) was considered an essential part of his coming of age ceremony. A few Roman tonsores became wealthy and influential, running shops that were favourite public locations of high society; however, most were simple tradesmen, who owned small storefronts or worked in the streets for low prices. 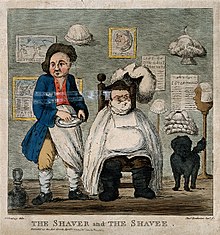 Starting from the Middle Ages, barbers often served as surgeons and dentists. In addition to haircutting, hairdressing, and shaving, barbers performed surgery, bloodletting and leeching, fire cupping, enemas, and the extraction of teeth; earning them the name “barber surgeons“. Barber-surgeons began to form powerful guilds such as the Worshipful Company of Barbers in London. Barbers received higher pay than surgeons until surgeons were entered into British warships during naval wars. Some of the duties of the barber included neck manipulation, cleansing of ears and scalp, draining of boils, fistula and lancing of cysts with wicks. 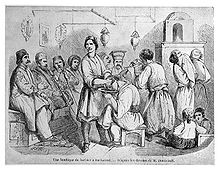 Barbershop in Bucharest ~1842. The barbershop also provides an opportunity for social contacts.

Barbershops were influential at the turn of the 19th century in the United States as African American businesses that helped to develop African American culture and economy. According to Trudier Harris, “In addition to its status as a gathering place, the black barbershop also functioned as a complicated and often contradictory microcosm of the larger world. It is an environment that can bolster egos and be supportive as well as a place where phony men can be destroyed, or at least highly shamed, from participation in verbal contests and other contests of skill. It is a retreat, a haven, an escape from nagging wives and the cares of the world. It is a place where men can be men. It is a place, in contrast to Gordone’s bar, to be somebody.” Barbershops from black barbers at first mostly served wealthy caucasians. In the later part of the century they opened barbershops in black communities for serving black people.

The average shop cost $20 to equip in 1880. It was about ten by twelve feet. A hair cut in 1880 would cost five or ten cents and shaving cost three cents.

In the late 19th and early 20th century barbershops became a common business where people would go to have their hair cut by a professional barber with good equipment. People would also play Board games, talk about recent events and farming business or gossip. They can sometimes also be used for public debates or voicing public concerns.

Most modern barbershops have special comfortable barber chairs and special equipment for rinsing and washing hair and big Hair dryers that cover your whole head. In some barbershops people can read magazines or watch TV while the barber works.

Despite the economic recession in 2008, the barbershop industry has seen continued positive growth. Recently there was a trial that had barbers check high blood pressure in barbershops and have a pharmacist meet and treat the patient in the barbershop, with positive results.

In 2018 Arthur Rubinoff opened a museum with barber’s poles and antique barber equipment in Manhattan.

The barber Sam Mature, whose interview with Studs Terkel was published in Terkel’s 1974 book Working, says “A man used to get a haircut every couple weeks. Now he waits a month or two, some of ’em even longer than that. A lot of people would get manicured and fixed up every week. Most of these people retired, moved away, or passed away. It’s all on account of long hair. You take old-timers, they wanted to look neat, to be presentable. Now people don’t seem to care too much.”

Given their importance as social hubs in certain cultures, barbershops have been used in educational campaigns. These include the U.S. literacy project Barbershop Books, which sets up reading stations in barbershops to promote a culture of reading among African American boys. Public health researchers have also explored barbershops as a venue for sexual health education.

The Modern Man`s Guide To Beards

Thinking About Getting a Beard Trim?